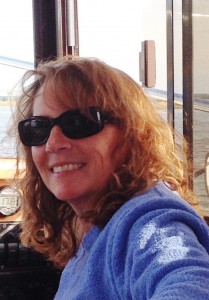 Tanya Binford grew up in Albuquerque, New Mexico.  She got married in her second year of college and dropped out when she was pregnant with her daughter at 19.  Her son was born two years later.  When her children were young she lived in the San Francisco Bay Area in California.  After a difficult ten year marriage, she got divorced and went to nursing school to earn her associates degree in nursing.  After becoming a nurse, she moved to Tucson, Arizona, where she lived for the next 14 yrs.  During that time, she obtained her advanced degree and became a psychiatric nurse practitioner, working in public mental health.  For ten years, she practiced as a nurse practitioner in Nogales, AZ, the later years through tele-psychiatry, out of her home in North Carolina.  At 51, she took a year off work and accomplished her goal of circumnavigating the Eastern United States in a 25 foot boat.